What comes to mind when you think of Chicago? Hot dogs? Deep dish pizza? Maybe it’s the access to the lake, or the Magnificent Mile. Whatever the case might be, you’re wrong. While Chicago is home to all of those things and a multitude of others, there’s good reason that the first thing that should come to mind when you think of the Windy City is the modern data center. Currently, Chicago comes in second in the nation for the amount of bandwidth and data stored within its data centers, second only to northern Virginia. And that trend shows no sign of slowing. What makes Chicago such a popular place for data centers and cloud hosting? Actually, there are several reasons. 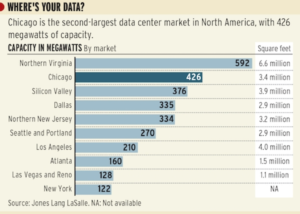 Data centers need access to reliable, high-speed Internet backbones in order to serve their customers and ensure that consumers are able to stream the movies, music and other media they love. Chicago’s network of fiber optic cables is among the best in the nation, making this a huge draw for data centers. And make no mistake, Internet connection suppliers have noticed and will keep doing their utmost to keep the area’s infrastructure as attractive as possible. The city’s central location in the country and on the nation’s rail system also play a role here.

When is the last time you heard about Chicago being struck by a serious natural disaster? Yes, it’s windy. Yes, winters can be cold, and blizzards do happen. However, when was the last time Chicago experienced an earthquake? What about volcanic activity? It’s also not likely to be hit by a hurricane, or experience massive flooding despite its proximity to Lake Michigan.

Data centers need to be constructed in the safest possible physical location. While there’s a massive one in Miami, right in hurricane alley, most are located as far from these areas as possible. Chicago is prime real estate for those who want the least number of surprises possible in terms of catastrophic natural events.

Yes, Lake Michigan is a huge draw for tourists. It’s also the source of drinking water for the city, as well as home to an incredible number of recreational activities. However, data centers love the lake too, and for a couple of different reasons. First, the city’s proximity to the lake helps to maintain area temperatures. That’s an important consideration for data centers, which must maintain a stable internal temperature year-round. Another reason is access to the lake’s water. Data centers have immense cooling needs, and piping water from the lake (at some of the lowest national water rates) is a huge boon to these facilities.

Data centers need to have both a reliable primary supply of electricity, as well as redundant power options (in the form of solar power, diesel generators or something else). The city of Chicago, particularly the downtown area where most of the data centers are clustered, and where new ones are being built right now, has one of the most reliable power supplies in the entire country. That’s largely due to the fact that the lines are all underground. This protects them from wind, rain, snow, accidents and other threats that plague cities where the lines are located aboveground. In addition, the supply itself is incredibly reliable. It’s been decades since downtown Chicago experienced any sort of widespread power outage.

It’s not all about power and cooling. Chicago is a prime location for data centers thanks to its traffic infrastructure as well. The city’s public transportation system is robust and well developed. It’s also home to one of the busiest airports in the world. The city’s surface streets are also in good condition.

Businesses and Corporate Base

Data centers are nothing if they lack customers. Thankfully, Chicago is home to an incredibly large business base, ranging from startups to Fortune 500 companies and everything in between. A sampling of names includes Boeing, Kraft, Walgreen’s, and Sears, but there are plenty of others. And that list just keeps on going as more and more businesses enter the area. New data center owners are actually building without even lining up tenants before breaking ground. That’s because despite the fact that Chicago is the second largest home of data centers in the country, supply is still dwarfed by demand. 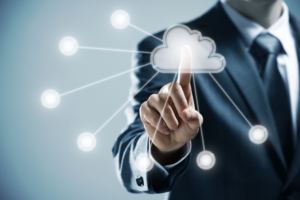 The Role of the Cloud

The rise of the cloud is another factor in both the explosion of data centers in Chicago and the city’s draw for new ones. By the year 2020, a full 50% of businesses around the world will run most of their IT operations through the cloud. And that doesn’t even count the rise of services like Netflix, Apple Music, Amazon’s music and TV programming and other similar services. More and more consumers are unplugging from cable, only to plug into their Internet provider, and there must be data centers in place to support that demand. In an article for Crain’s, the head of James McHugh Construction, Larry Graiber explained, “We believe that the cloud is the big push behind the increase in demand all across the United States.” As a note, McHugh plans to build a large data center right downtown, within mere steps of the nation’s largest data center, which is owned by Digital Realty.

For Chicago and for both current and would-be data center owners, the future is bright. As a nation, we continue to embrace digital technology both at home and at work. That means the demand for data center storage and service will only grow, and the pace is definitely accelerating.