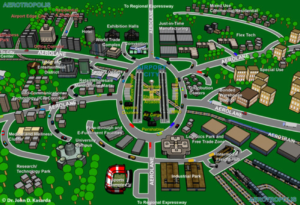 Were you one of the people surprised when the Denver, CO, airport shut down after the attacks in Belgium? What did the one have to do with the other? Well, if you’re a conspiracy theorist, or just a very observant private citizen, it definitely smacked of something fishy. Perhaps the rumors that DIA (Denver International Airport) is home to a top secret military base were true? Or is it home to a massive server farm instead? What do we know about the facility?

Interestingly, while the Denver International Airport doesn’t have claim to the busiest airport in the US (that belongs to Hartsfield International in Atlanta and to Chicago’s airport) it is the largest airport in the country in terms of land size. In fact, it’s the second largest in the entire world if you measure by acreage (well, square miles would be more apt in this case, with the facility taking up a whopping 53 square miles). What does the airport need with that much land? Perhaps a cover for something else?

The Truth about the Server Farm

Whether rumors about a secret server farm on the DIA property are true or not, the fact remains that it will eventually be home to a huge data center right out in the open. Back in 2010, the city’s mayor announced they were embarking on what was dubbed Airport City. Essentially, this would be a city housed at the airport, including a full business sector. To support that business sector, a data center had to be built. So, whether it was before or not, it certainly will be. This would actually allow any clandestine server farm to “integrate” with legitimate operations, essentially hiding in the open. Of course, the final completion of that city years – perhaps decades – away. The city is still wrangling with other cities and counties that surround the airport for final approval just to start the planning process. In the end, it remains to be seen if the DIA aerotropolis will amount to much of anything beyond talk.

The server farm rumor is just one of many. Some people claim that the coordinates given in Close Encounters of the Third Kind lead you directly to the location of Denver International (they actually land you about 51 miles to the northwest). Some people claim that the tunnels under the airport are too tall and were built for alien beings. The truth is that they were built to handle the old baggage system, which was quite massive.

Yet others claim that the baggage system itself was a cover for something more insidious – a way to get cadavers out of underground torture and psychological testing facilities. Finally, others seem to meld the claim of a government military base with something else. They claim that an entire city exists under the airport. This is at least partially true, as the airport has extensive underground tunnels, rooms and other operating areas for staff.

The Truth about the Military Base

The rumor that something was “off” about the DIA location has persisted for years. The airport began construction back in the 1990s, and right from the start, residents had their suspicions. Since then, rumors have persisted, with various media sites claiming to have finally revealed the dimensions, gate locations and other specifics of a hidden military base deep below the ground. What fuels these rumors? Actually, there are some interesting facts that might indicate there is more than a little truth here:

Is any of it true? That’s not entirely clear. Conspiracy theorists claim hard evidence supporting the theory, but as yet no incontrovertible proof has been provided. With that being said, things will definitely get interesting around Denver International as the city ramps up its efforts to create an aerotropolis (the airport city mentioned previously). Excavation and construction on this scale would be very unlikely if there actually were a secret military base underground. Of course, what better cover could there be for such an installation than an entire city aboveground? That would allow the masking of just about any sign of their presence, including server farms, power drains, and more.

It also plays directly into further speculation about an entire network of underground cities and military bases scattered across the country and all connected by massive tunnels. The reason for constructing these facilities range from having a safe place for government should Washington DC be compromised to staging areas for military forces in the event that America comes under martial law.