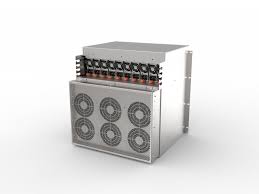 If you are going to be spending time mining Bitcoin ASIC hosting, you need to make sure that you have the proper setup. This means you need to have the right Bitcoin mining machines running either at your home or a facility. While there are many different options available, one of the up and coming companies that is well worth watching is Spondoolies-Tech. The company has a team of professionals that have been making miners since around 2014 when they introduced their SP20 Jackson. Over the years, they have come out with other miners. One of their latest, the SP50, dubbed the Pickaxe, has become popular.

What Does the SP50 Offer?

This is a large machine that is used for Bitcoin mining and that might be a nice option for those who have enough space for it in their warehouse or data center, for example. This was released to be used for large commercial miners. The machine has an effective hash rate of 110 TH/s. The nominal power consumption for the machine is 16,570 W, and the power efficiency is 0.15W/GH/s. Because of the size and power of the machine, it means you will not only need to have a large amount of space, but also plenty of power for it.

Those who have been following Spondoolies-Tech machines will note that this is a massive improvement from their previous unit, the SP35 Yukon. It is much faster and has more capabilities, which has helped to boost its popularity.

Even though it tries to be energy efficient, and it is given the amount of power it has, this will still take up a lot of electricity. Depending on where the owner lives, it might not be economically feasible to have one of these running in their own city. In those cases, it makes more sense to have the devices sent to a colocation facility in an area where the cost of electricity is much lower. This means you will pay off the cost of the machine sooner, so you can start making more money in the mining business.

This ASIC miner features a TI Sitara 1GHz controller based on Beagle Bone Black, along with a Linux embedded controller board OS. It has CGminer mining software with a custom plugin, as well. Despite being so large, it is still relatively simple to get it up and running. Because it can run hot, it has six fans that are 120mm. It also has 10 power supplies that are 16KW.

Consider How You Will Be Mining

Is the SP50 Pickaxe going to be the right mining rig for your needs? Unless you are running a larger private operation or a commercial operation, it might not be needed. However, if you can afford the machine, and you have the space available for it, there is a lot of promise to what it can offer.

Whenever you are determining which type of mining machine you are going to get for your cryptocurrency mining needs, it is important to make sure you are choosing right. For those who want to have a relatively small operation, it is not as easy to make a profit as it used to be. It requires faster processors and likely more processors, and it may not be possible to keep these at home. They can be expensive, they can be loud, and they can cause the temperature of a space to increase. Colocation is a good solution for more people, but it is likely a necessity for those who are planning to use the large SP50 from Spondoolies-Tech.